Liquid: The Delightful and Dangerous Substances That Flow Through Our Lives by Mark Miodownik (Viking, 2018)

Nine Pints: A Journey Through the Mysterious, Miraculous World of Blood by Rose George (Portobello, 2018) 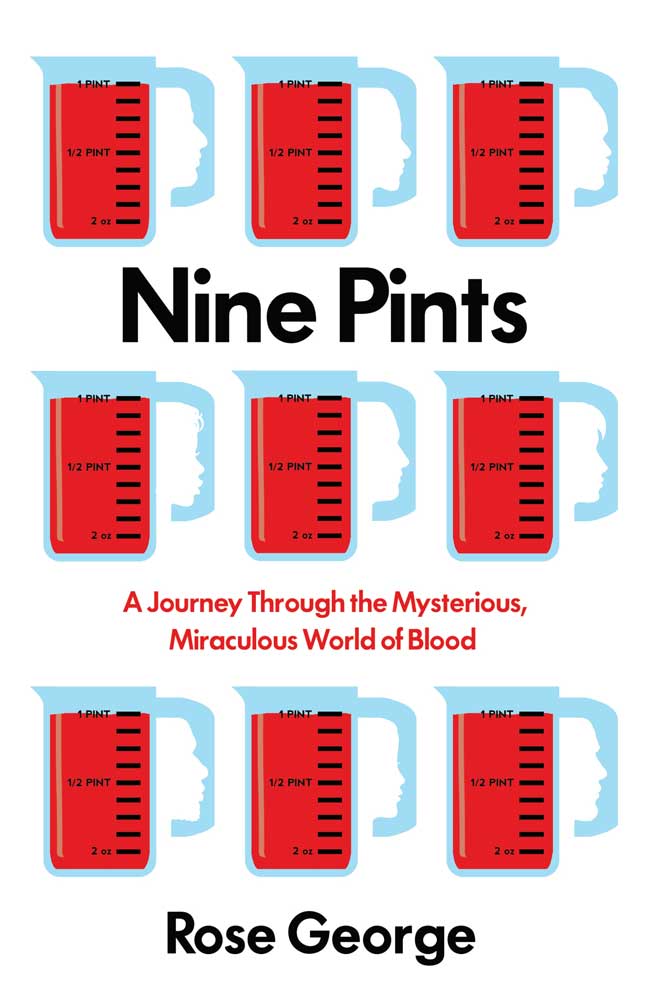 On opening Mark Miodownik’s new book Liquid I was startled to find a discussion of the merits (and a photograph) of the famous de Havilland “Mosquito” bomber, suggesting that the author’s attention had strayed far from his book’s rather lengthy subtitle. One of the great counter-intuitive achievements of British design and engineering, the frame of the Mosquito was built almost entirely in plywood, making it exceptionally light and fast and invisible to radar. What interests Miodownik—professor of materials and society at University College London—is less its structure, plywood having been around since the ancient Egyptians, than what held it together: it was the polymeric phenol-formaldehyde adhesive developed by the Belgian-American scientist Leo Baekeland in 1907 that allowed the fuselage and wings to be moulded to specification and made resilient enough for the stress of flight.

In his book, which contends that liquids are “exciting and powerful… anarchic and slightly terrifying… delightful and dangerous”, there’s no getting away from air travel. One particular aircraft, in fact, since the narrative device Miodownik uses to bring together his digressive accounts of scores of different fluid substances is a routine BA flight from London to San Francisco—eleven hours and 5000 miles—to attend a conference there on sustainable technology. Next to him on the plane is a woman called Susan, who serves as the focus of his free-floating curiosity. To his embarrassment, he falls asleep on her shoulder after drinking a goblet of red wine, a cue for discussing the Marangoni effect, a surface tension phenomenon that causes wine to form “tears” or “legs” and umami, the glutamate-related taste sensation which some claim is heightened during air travel.

Susan is a non-speaking partner throughout, and I found it most implausible that she turns out to be a keynote speaker at the very conference he is attending, an engineer unknown to Miodownik. That’s not how it works in scientific circles. Could it be that her surname is MacGuffin? Miodownik certainly displays ingenuity in using the extended conceit of a plane journey to talk about the brooding power of the thousands of litres of kerosene packed in the wings of the 747 (“10 times as powerful as the explosive nitroglycerine”), the liquid crystal display of the monitoring screen on which he desultorily watches a Spider-Man movie, Orwell’s famous essay on how to make a decent cup of tea (the one served by the flight attendant is “horrible”) and the life of the remarkable inventor of the pen that bears his name, László Bíró—to mention only four of his digressive sallies. But there is a disconnect between the claustrophobic feel of a narrative told in the restricted space of an airplane’s cabin and Miodownik’s upbeat tone, “outcharming” matter itself. Who remembers the in-flight entertainment programme—a form of distraction from the tedium of having to sit still for half a day—from even a recent long-haul flight?

Some digressions tap into the deeper, almost paradoxical nature of the material world. The chapter “Indelible”, mainly devoted to Bíró, discusses how the inventor was able to exploit the odd behaviour of non-Newtonian or oobleck fluids, which alter their viscosity when a force is applied to them, by inserting a minuscule steel ball into a pen’s nib. The pressure exerted by the ball is enough to fluidify the ink, letting it flow out only when needed. The same phenomenon is observed on smacking the bottom of a ketchup bottle. On the macroscopic scale, subsoil liquefaction of this kind occurred around the Sulawesi city of Palu last October, when an earthquake struck the island, causing hundreds of deaths. Such is the unruly quality of liquids, “always on the move, seeping, corroding, dripping and escaping our control”. Leonardo da Vinci, for one, devoted more pages of his notebooks to describing the life-giving but “slightly terrifying” duality of fluids than to any other element. While Miodownik’s tone throughout his book is upbeat, even evangelical at times, convinced that the almost magical unfettering of the material world by human ingenuity will save the day, I was struck to read about the effect of “post-glacial rebound”, which is likely to occur when the trillions of litres of water held captive in the massive ice sheets at both poles melt: not only will there be a problem of rising sea levels but the “de-stressed” tectonic plates will rise upwards—shifting the Earth’s coasts, triggering off magmatic events and even tilting the planet’s gravity field. Perhaps the late Zygmunt Bauman had good reason to make liquidity the master metaphor for his fears about the wastefulness and amorphism of contemporary consumer society.

Miodownik mentions the “amazing family of molecules” called perfluorocarbons (PFCs) in one of his chapters. These inert liquids, which consist entirely of lines of carbon and fluorine atoms in one of the strongest bonds known to organic chemistry, are able to absorb significant quantities of oxygen and other gases, thus enabling their experimental use in neonates born so early their lungs have yet to mature. Readers may remember the dramatic scene in James Cameron’s film The Abyss when a pet rat is submerged in a container filled with PFCs and continues to breathe (after an initial struggle). PFCs have some remarkable properties and are the closest researchers have come to producing a blood surrogate, but they still lack many of the extraordinary properties of the actual stuff. “Blood is not done teaching us what it can do,” writes Rose George. “More wonders will come.”

This living tissue—the intimate red stuff of life and death, folklore and myth, biology and metaphor—is the topic of George’s fourth book Nine Pints, a collection of nine free-standing essays on blood-related topics. She covers a lot of ground, globally and figuratively. Her travels take her to Nepal, India, South Africa and Canada in search of telling examples of the various aspects of what Mephistopheles, in Goethe’s Faust, called “ein ganz besondrer Saft”—a very peculiar or special juice (not the “amiable juice” George suggests). That Faust has to sign his famous wager with his own blood is entirely germane to her own explorations, blood being a substance not only of mysterious powers but provenance: George is amazed to discover that most people have no idea where blood cells are made. Answer: bone marrow (which produces 500 billion a day).

In lieu of a formal introduction, George sets the scene for her readers with a prospect of her donating a pint of her own “A pos” to the NHS’s Blood and Transplant service. “Every three seconds, somewhere in the world, a person receives a stranger’s blood.” Blood and its derivative products are big business: it is the thirteenth most traded product in the world, and over a 1000 times more expensive per cc than crude oil. Donating blood is a commonplace act of altruism, and yet there are countries in the world where donors expect to be paid, a practice that has always been criticized by the World Health Organization. Several thousand British haemophiliacs became infected with hepatitis C and HIV in the 1970s and 80s after receiving contaminated clotting factors that had been prepared from pooled plasma obtained in the US from large groups of paid donors, including “from clinics in skid rows and prisons”. Plasma is extracted by a process called apheresis, in which blood components (usually the cellular ones) are restored to donors, meaning that they can return much more frequently (up to twice weekly) than with classic blood donation: it is a lucrative business for both donors and the companies that transform plasma into its derivatives. But as George observes, it is no longer “a human body part but a product”, and the charitable act of donating in the public interest has been co-opted for pecuniary gain and commerce.

How did we come to have blood donor centres anyway? George provides a capsule biography of the remarkable Dame Janet Vaughan whose portrait, as it happened, hung in the residence of her own Oxford college, Somerville. “How I love the brisk nervelessness of this woman,” George exclaims. Vaughan established a reputation in the London Hospital before the war as a researcher in pernicious anaemia and other blood disorders: as supervisor of the Slough depot she played a key role in organising the blood supply system in 1939. This meant finding recipients for the citrated blood (modified milk bottles), vehicles (converted Wall’s ice-cream vans) and drivers (who had to negotiate roads under black-out conditions). “The war”, as George writes, “embedded the idea of blood donation in popular consciousness like nothing else had done”. It could be argued that development of transfusion services was more important in saving lives than the invention of penicillin.

Like Miodownik, who notices how often a feeling of disgust is triggered by the slimy and gloopy aspects of liquids, George observes how blood arouses contradictory emotions. Some of her other investigations into its taboo or offputting aspects—inviting a parallel with her remarkable debut book about human waste The Big Necessity (2008)—include a visit to firm in Wales that breeds and sells medicinal leeches (they are still used in reconstructive surgery to prevent venous congestion and enhance flap survival); the practice of chaupadi in rural Nepal, where menstruating women are confined to cold, insalubrious, sometimes dangerous huts outside the house; and the fate of young girls (known as “blessers”) in South Africa who put themselves at risk of HIV through relationships with older, richer men (“blessees”). Other topics—the bleeding heart as an image of divine love (which burst its banks in the baroque period) and the extraordinary mass cultural appeal of the vampire inversion of the Eucharist (blood turned into wine) could have been dealt with in more detail, but I suspect they hold few attractions for George’s “Yorkshire plain-speaking soul”.

Nine Pints is, finally, a very personal book: George reveals that she, like one in ten women, suffers from endometriosis and wonders why so little research has been done into “clinically distressing changes in [premenstrual] mood and behaviour”. It is also an engaged one: she cites a Saskatoon doctor who tells her that “the practice of medicine is a political act however you choose to do it.” Not just medicine. Her most inspiring story is that of Arunachalam Muruganantham (“Muruga” for short), a Tamil Nadu inventor of humble origins who, observing his wife hiding her “nasty cloths”, worked for years in the 2000s to develop a low-cost machine to make sanitary pads from fluffy pine bark pulp—an eminent example of “grassroots technology” that has transformed life for thousands of women in rural India.