I’m no fan of the term “downtime” which reinterprets leisure as a kind of absenteeism from productivity (by analogy with outages in industrial systems and power networks), and only grudgingly concedes that “human capital” needs to “resource” itself. Many cultures across the world, not least those around the Mediterranean, long ago adapted to the human need to seek refuge from hot summers, and the grind of the working day. For a few years now, nap-taking (as in “power nap”) has been the Latest Big Thing in office life—but is it really the same thing as the siesta?

My father-in-law is a German journalist who still writes, well into his retirement. He may owe his energy, and the fact that he still writes well too, to a remarkable ability: he flops down on his couch in the afternoon, closes his eyes for fifteen to twenty minutes, and then gets up refreshed and alert, ready to rise in the trailing wind of ideas. He has done this throughout his professional life, and he swears by it. He calls it a Nickerchen; my French friends in the south talk about a méridienne (title of a familiar 1889 painting by Van Gogh of two peasants lazing in the lee of the haystack), whereas in English we take a nap, or the curious forty winks. Siesta is the universal word for this activity—from the Latin sexta: the sixth hour for sundial users—though it’s perhaps rather exotic-sounding under a northern European sky. And while I’ve tried to acquire my father-in-law’s clandestine ability of catching forty winks myself, I’m not a very dependable homo siestus, except perhaps on holiday in the south of France, when the sun, from midday to about 4 o’clock in the afternoon, drums on the shutters of the village of E—, population 512 (+4).

Across the river the cicadas endlessly chirrup a line from Virgil—Sole sub ardenti resonant arbusta cicadis (“Under the burning sun the orchard hums with cicadas”)—as their midday report to the Muses, and a lizard on the brickwork tries to teach me the sign-language which, as Heinrich Heine observed on his travels in Lucca, makes it possible even for poets to converse with mute nature. Le temps d’un songe…

A siesta frees us, as the Spanish poet Antonio Machado nicely put it, from the omnipresence of the world.

In Greek times, Hippocrates thought that sleeping after a meal moistened and propelled the food to all parts of the body; and Hippocrates’ prestige was such that we still remember his recipes. The best-known classical siesta-taker was the cynic philosopher Diogenes, who is remembered by everyone because he lived in a tub. He was famously rude to Alexander the Great because the upstart emperor, who also happened to be Aristotle’s most famous pupil, dared disturb him during his tub-nap in the city of Corinth. “Anything I can do for you?” asked Alexander, whose hunger for power would famously take him as far as the gates of India. “Get out of my sun,” suggested Diogenes, who had already recognised the emperor as the very first modern man, someone whose overriding concern was to bag his place in that same sun. (It is noteworthy that our use of the word cynic reflects Alexander’s reality, not Diogenes’.) Homer mentions in the The Iliad that the respected older warrior Nestor was almost as touchy as Diogenes about not being disturbed in the afternoon, whatever Hector and the Trojans might be up to.

In China, the right to nap is enshrined in the constitution—factory workers in the famously productive land commonly have a nap after lunch, sometimes even on their workbench. Peru’s military once had to quell an uprising because its government foolishly thought to ban siestas. Europe’s class-struggle extended to opportunities for sleep: Paul Lafargue, Marx’s son-in-law, wrote a tract called Le droit à la paresse (The Right to be Lazy, 1883), demanding that the proletariat ought to work at most three hours a day with the rest of the time set aside for the pursuit of enjoyable things including siestas. And Friedrich Nietzsche—though no lover of the proletariat—agreed: anyone who didn’t have two-thirds of the day to himself was a slave. He came to the following conclusion: “The hardest-working of epochs, ours, doesn’t know what to do with its work, its money, other than always more money, more work.”

What is really at issue is the notion of leisure, which for us has an escapist ring to it: for the Greeks, leisure was a wholly positive term (and it is telling that the Greek word for leisure has given us the word ‘school’): leisure was when people undertook activities for their own sake. Only busybodies were destitute of leisure.

Compare that attitude to the time-and-motion studies of the American F. W. Taylor which swept across a Europe producing armaments as hard as it could during the First World War, where the methods of trench organisation were noted for future reference by the young Walt Disney and Ray Kroc, the founder of McDonalds. ‘You give in to the noise like you give in to war,’ wrote the French doctor and novelist Louis-Ferdinand Céline after a fact-finding mission to the Ford factory in Detroit for the League of Nations; he thought Chaplin in his film Modern Times had caught all the frantic cretinization of work on the assembly line (even though the film was a silent one). Having discovered how to manipulate matter, the second industrial revolution put its mind to managing humans. Fat chance of a siesta when a foreman had to drill the monotony of the assembly line into his workers! It was the machine that counted, and the machine never slept.

Work became precisely quantified as output: time to produce one item. Yet assimilating time to money is a relatively new concept in the history of the human race: we act as if time were a valuable commodity, therefore we consider it must be so. Difficult then to imagine that cultures still exist, even today, where nobody runs out of it, has to set some aside (e.g. for a siesta) or is ever compelled to live on the borrowed variety. 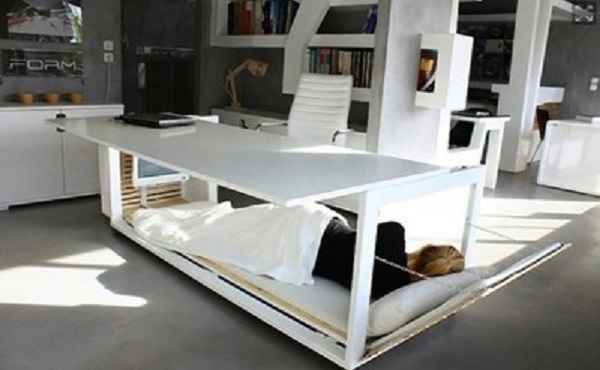 The curious thing is, as the philosopher G. C. Lichtenberg said, long before the industrial revolution came to his home town of Göttingen: “People who never have time accomplish the least.”

Now, as we hurtle into the third industrial revolution, one seemingly bent on changing the nature of reality itself, the siesta’s slightly furtive moment of hunter-gatherer repose has been rediscovered—by Americans. Being an aspiration as much as a country, America lives in thrall to the idea of tomorrow, and is rather gnostic about today: this is called the work ethic. It is still true, as sociologists have observed over the years, that although the United States is one of the most affluent countries in the world Americans remain poor in terms of leisure (where the typical holiday allowance is a paltry two weeks, and some companies like Microsoft frown on employees ever “taking their foot off the gas”). Put your time to good use, as the saying goes. A balance sheet is clearly implied.

It might seem a bit odd then that an American World Nap Association (WNO) can now be found on the net. It is apologetic about what it promotes, pointing out that for most Americans napping is still tainted by Sloth, one of the seven deadly sins. Roget’s Thesaurus—now transatlantically compiled—categorises the word along with “indolence, inactivity, loafing, procrastination, lethargy, slouching, vegetating,” none of them exactly glowing recommendations. Not being busy is, for the puritan mind, the very source of vice: leisure, for the other-regarding egalitarian mind, smacks of privilege.

I now read that American creative management, which is paid a great deal of money to have bright ideas, has just had a brainwave: why not get workers to have a pause in the middle of the day? Gould Evans architects’ office in Kansas City, for instance, has just installed a napping loft for its employees to combat the performance dip between 2 and 4 pm. They’ve got it wrong though, especially with the term “power nap.” Impose a siesta on people and you destroy the reason for having one at all.

So next time you feel an urge to lie down for a few minutes after lunch, just do it. Paddle in the shallows. Don’t feel metaphorically entailed. We are intermittent beings. Seeking a permanent high—living only on the summits, as Nietzsche didn’t quite say—is a production-line aspiration. That goes for happiness too. Whereas napping in the valleys, as Diogenes realised, is the original acte gratuit.

But beware: pondering why individuals claim to be free when their freedom so closely resembles alienation may unfit you for work altogether.

© Iain Bamforth. First published in a shorter version as “Sleeping on the job”, British Journal of General Practice, August 2000